Foot Down (No No to Knock-­‐Knocks)

Folded and Packed (No No to Knock-­‐Knocks)

Slow Slope (No No to Knock-­‐Knocks)

For the third exhibition in Blain|Southern’s Lodger series, the British sculptor Brian Griffiths has drawn on stage- and screen-writing techniques to develop a ‘character’ who will inhabit the gallery’s basement space. Appearing in a series of sculptural situations, often on the point of collapse, or running through some seemingly meaningless protocol, Griffiths’ creation is a tragi-comic figure: a naked, puppet-like Caucasian male who seems not to know that his strings – if they ever held him up – have now been decisively cut. Bald, blind, and with his pink paintwork and wooden body showing signs of wear and tear, this little performer clunks through his part.

Three canvas works are suspended from the gallery ceiling, and slump onto its floor. Rough approximations of the human form, their large size, grey pigment, and fabric construction is an abrupt shift in scale, color and material. Considering the two types of figurative sculpture that cohabit in the exhibition space, we might ask ourselves ‘who is dreaming whom?’

With its percussive title, which suggests the rattling of wooden limbs, and appears to prohibit that most tiresome of comic routines, the knock-knock joke, Griffiths’ exhibition is an exploration, as he puts it, of ‘objects as fictional tools’. Are these works sculptures playing at being puppets, or puppets playing at being sculptures?  Then there is the question of who is pulling their (absent) strings.

Griffiths’ not-quite-puppets are ambiguous performers, eliciting both laughter and sympathy. Material objects rather than living bodies, they are fated to take to the stage despite the implausible ‘woodenness’ of their acting’, to communicate only through their own dull matter.

A publication accompanies the exhibition, with a new text by Tom Morton. 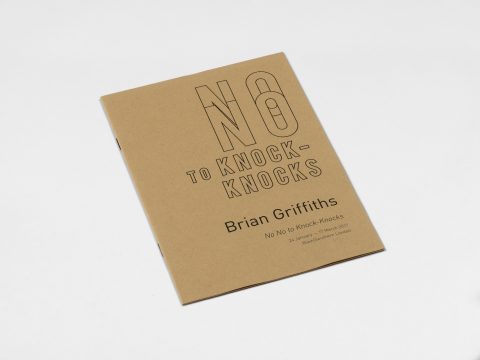 Lodger is a series of exhibitions at Blain|Southern, conceived by the writer, curator, and Contributing Editor for frieze magazine, Tom Morton. Running concurrent to the exhibitions in the central space, Lodger expands Blain|Southern’s programme into new territories. Previous artists participating in the Lodger series include Alex Dordoy and Sophie Jung.

Tom Morton’s exhibitions include Äppärät at the Ballroom Marfa, Texas (2015), British British Polish Polish at the CSW Ujazdowski Castle, Warsaw (2013) the touring survey British Art Show 7: In the Days of the Comet (2010/11, with Lisa Le Feuvre), and How to Endure at the 1st Athens Biennale (2007). He has worked as a curator at Cubitt Gallery, London and the Hayward Gallery, London, and his writing has appeared in numerous exhibition catalogues and anthologies.

Enquire about No No to Knock-Knocks