‘We put too much of ourselves into our product facades, spinning too much mass to our outer edges where we hope it is both publicly visible and instantly lovable. One problem with this strategy is that it leaves too much blank space in the middle, so there’s not much of ourselves left for lovers or friends to discover in the long term. This could be called the centrifugal-soul effect.’  - Geoffrey Miller

In The Centrifugal Soul, Mat Collishaw’s forthcoming exhibition at Blain|Southern, the artist presents new sculpture, installation and paintings. Drawing on various forms of illusion, the exhibition explores ideas of superficial truth and the erosive effect of our primal urges for visual supremacy.

Collishaw worked with evolutionary psychologist Geoffrey Miller - whose theory is that the origins of art stem from natural instincts of courtship and reproduction - to produce the title work and centrepiece of the exhibition. The Centrifugal Soul is a sculpture in the form of a zoetrope, a pre-film animation device that produces the illusion of motion through rapid rotation and stroboscopic light.

The zoetrope animates scenes of bowerbirds and birds of paradise as they perform elaborate mating rituals. The work offers a captivating demonstration of how aesthetic diversity has evolved through sexual selection and also reflects the artist’s ongoing examination of our insatiable appetite for visual stimulation. Collishaw’s sculpture embodies Miller's idea that evolution has created an inescapable drive to be noticed above the visual competition, feeding our need for self-promotion.

Elsewhere in the exhibition, a new body of work continues the examination of visual power play. Twelve trompe l'oeil paintings of British garden birds tethered to perches reference the seventeenth-century fashion for commissioning portraits of prestige pets, made popular through Carel Fabritius’ painting The Goldfinch (1654). The colourful graffiti-tagged walls against which the birds struggle to stand outprovide a contemporary example of aesthetic boasting as a form of sexual signalling.

Albion is a new installation that takes as its subject the Major Oak in Sherwood Forest, Nottingham, which has an almost mythical status. This centuries-old tree has at its core a hollow rotten trunk, and since the Victorian era its vast limbs have been supported by an elaborate system of scaffolding. Collishaw's monumental, slowly rotating image of the oak is a ghost-like apparition generated by laser scanning. The image represents a living object that is trapped in perpetuity to present the illusion of life. As with the tethered birds in Collishaw’s paintings, it presents a tension between the beautiful and the abject.

Throughout his work, Collishaw has examined the way in which we consume imagery and how our biology has conditioned us to respond. The exhibition reflects the consistent themes addressed in the artist’s practice and the diversity of his chosen mediums. Moreover, it questions how much choice we have in accepting what seems to be a natural preoccupation with self-image.

The Centrifugal Soul is accompanied by a detailed catalogue which features texts by art critic Waldemar Januszczak, evolutionary psychologist Geoffrey Miller and an artist interview with writer James Parry.

The exhibition precedes Collishaw’s new virtual reality installation Thresholds. Launching at Photo London, Somerset House on 18 May, it will recreate one of the earliest exhibitions of photography.

Part of Mat Collishaw’s critically acclaimed exhibition The Centrifugal Soul, Albion is an installation that takes as its subject the Major Oak in Sherwood Forest, Nottingham. This centuries-old tree has at its core a hollow rotten trunk, and since the Victorian era its vast limbs have been supported by an... 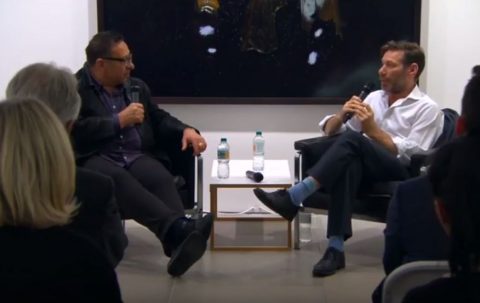 In Conversation with Waldemar Januszczak

Mat talks with Sunday Times' art critic Waldemar Januszczak about The Centrifugal Soul, his latest exhibition at Blain|Southern London. Their intriguing, in-depth and jovial conversation covers ideas about evolution, showing off, Brexit, Mat's new touring exhibition and his recurring interest in Victorian innovations. For more podcasts like this, please...

The title work and centrepiece of Mat Collishaw’s exhibition at Blain|Southern, The Centrifugal Soul is a sculpture in the form of a zoetrope, which animates scenes of bowerbirds and birds of paradise as they perform elaborate mating rituals. The work offers a captivating demonstration of how aesthetic diversity has evolved...

Enquire about The Centrifugal Soul